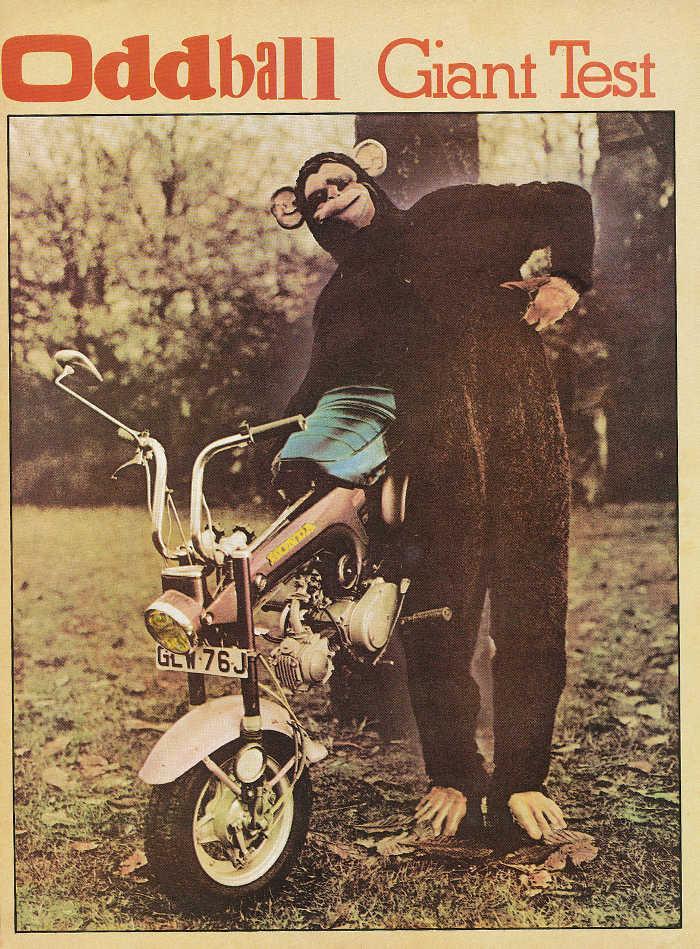 Back in the days before anyone had thought of the phrase "fun bike" and only commuters rode Japanese motorcycles, Honda came up with a jokey little creation which was soon dubbed the "monkey bike".

Quite what connection there is between that small wheeled dwarf of a bike and any member the ape family, I don't know. Maybe the guy who coined the name thought it was a prop for a circus act with performing chimpanzees, but nobody took it seriously, that's for sure.

Whether Mr. Honda took it seriously or not is another matter. I mean, do these Nips have a sense of humour? You can never tell whether those inscrutable Oriental features are smiling or scowling at you. Maybe the designer did have a sense of humour and conceived it as a huge joke at the expense of the gullible Westerners; "Ah so, we make monkeys of Amelicans."

Anyhow, from that first mini-bike the rather more sophisticated ST50 and ST70 evolved, but the monkey bike label stuck. They enjoyed something of a vogue about the time when people were painting flowers on 2CVs and talking earnestly about doing your own thing. An ST50 was a dashing accessory for the trendy young chick about town - just the job for nipping down to Ms. Selfridge.

In these gloom ridden times, such outrageously unserious contraptions don"t seem to go down too well. I can't remember the last time I saw an ad for the ST70, and Honda seem to be doing their best to unload their entire stock by giving them away by the handful to DJs and other minor celebrities.

It's a pity, because we need the absurd and frivolous even more in times like these. And the monkey bike is an amusing little plaything, so long as you don;t take it seriously, 'cos it ain't any more than that.

We had a job to lay our hands on an ST70 (the ST50 is now obsolete). One of our local motorcycle dealers had had one in stock for a couple of years, but sold it in a flash after we expressed an interest in it. And Honda didn't have one - unless we had a name like Emperor Rosko. So in the end we had to make do with an ST50 owned by our ace photographer Bob CC, no less. Although a couple of years old, it had not seen much hard work, except for an epic 200-mile non-stop journey across Ireland. Now I know why he walks like that.

Riding the monkey bike is dead easy. Just prod the gear lever into first, open the throttle and away you go. Centrifugal clutch, you see - makes it an ideal bike for beginners as there's no clutch lever to worry about. Changing up is achieved by shutting the throttle and stamping on the rocking gear pedal, but if you rev the motor hard in the lower gears the bike takes a disconcerting leap forward as you change up.

The engine is a dinky little four-stroke, with overhead camshaft, no less, but by the time the four and a bit horses it produces (six for the ST70) have been tamed by the three speed transmission the acceleration is hardly mind boggling. Deceleration is equally undramatic, unless it was just that the front brake on our test machine was unusually appalling.

Most surprising though, is the stability. It looks so weird, you just can't image it handling like a motorcycle, but within the severe limitations imposed by tiny wheels and chunky tyres, the monkey bike handles much better than you'd expect. Better than most scooters I've ridden, anyway. Seating for two is provided, but Honda have got to be joking. The sight of two people squatting on that thing is quite obscene, apart from being highly uncomfortable.

Oh and in case you're wondering where the petrol tank is, it's under the seat, which folds forwards to uncover the filer cap. With the total of 0.55 gallons, including a tenth of a gallon reserve, pump attendants are just going to love you.

One trick feature is the folding handlebars, the idea being that you can then stow the contraption in your car boot. OK if you run a Bentley and go to keep fit classes, but flabby Mini drivers can forget it.

So, cute it may be, but is it worthwhile? As an alternative about town bike to one of those dreadful cheap mopeds it's an amusing idea - at least people might think you've got a sense of humour as well as being mean.