The article source is in a terrible quality, but I have been able to transscibe most of it. Missing words have been replaced by a questionmark, but I'm sure it is still readable.

It has been well worth waiting for. Not only is the Honda four-fifty the news-bike of the year, it is going to hit the British market like a bomb. A couple of hundred high-speed miles on it confirm that all enthusiasts were right to view its coming with more than casual interest.

The technical details - 180-degree crankshaft, thin overhead camshafts, torsion-bar valve springs - are only one attraction. Push-button starting is another. So is eye-appeal to which photograph do scant justice. But the chief attraction, for me at any rate, is the Honda's dual personality.

At the bottom end of the scale it will chuff along like any good tourist twin. The engine is sufficiently flexible to hold top gear down to 2000 rpm and provide [?] torque to accelerate rapidly in top to 6500 rpm. 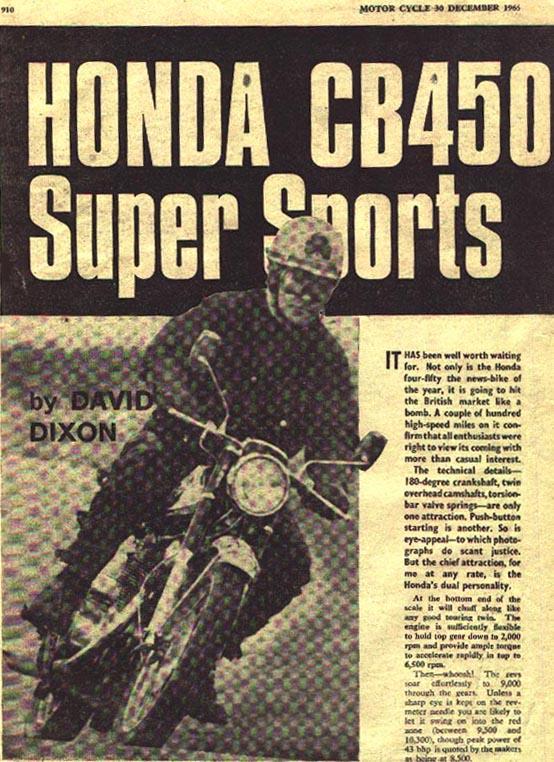 Indeed, I was wearing a bulky riding coat over my [?] suit and was quite incapable of getting flat on the tank. More lightly dressed, and cheating the wind, should ass at least another 8 or 10 mph at top whack.

This, in fact, was the first time I had ever done 100 mph when sitting up on a five-hundred without a fairing. Few enough six-fifties or seven-fifties will poke you along at that rate of [?] without you nodding towards the tank top.

Fast speedo? A check against the corrected speedometer of a nippy six-fifty which accompanied me showed the Honda's to be pretty well spot on. While doing this checking, we tested the acceleration of the Honda against the six-fifty. Cruising alongside one another at a steady 50 mph in top, we then gunned both bikes up to maximum. In the first few yards there was nothing in it, then the Honda edged ahead, markedly increasing in advantage when the added boost came in above 6500 rpm.

Just to prove it was no fluke, we repeated the exercise a second time, with an identical result. Then we tried a 40-to-80 mph run in third. Again the Honda had the advantage. These two experiments rather shattered me because up to that time I would have backed that particular six-fifty against virtually any other bike encountered on the open road. To have blown it off on a five-hundred was just too cheeky. 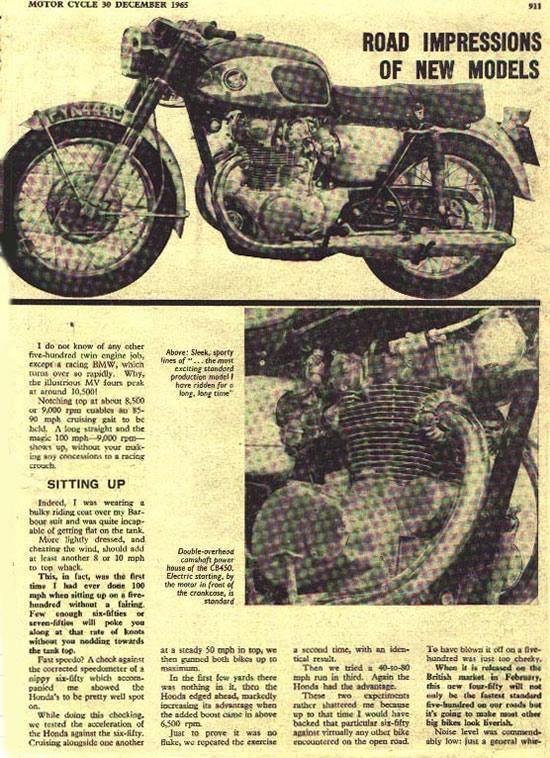 When it is released I the British market in February, this new four-fifty will not only be the fastest standard five-hundred on out roads but it's going to make most other big bikes look [?].

Noise level was commendably low: just a general whirring from the engine and an exceptionally well muted note from the exhaust, even under maximum acceleration. With the 180-degree [?] on the crankshaft, as on the sports two-fifty and three-o-five, the four-fifty was expected to provide a turbine-like flow of power right through the rev range.

In fact, below 6500 rpm the engine was only moderately smooth. Above 6500 it was smoother, leaving only a [?] of vibration through the handlebar.

The gear change was excellent. It seemed lighter than on the two-fifty and pedal movement - up for forward changes - was delightfully short and crisp. The pedal is on the left. In spite of bring purposely [?] on a few occasions, the clutch remained cool, calm and unflurried. First pictures of the four-fifty made it appear bulky and heavy, but sitting astride it, my first reaction was that this bike could not be a five-hundred. It seemed too small.

For me, a six-footer, the riding position was compact, but not to the extent of being cramped. All controlls are well positioned and were light in operation. But as I found, you should not just jump astride the first time and ride off; there are so many features worthy of examination.

For instance, that narrow petrol tank us rubber-mounted and retained by one bolt at the rear, the tapered nose goves an impression of being astride a lightweight. Rubber insulated also is the rear number plate presumably to cut the chance of bulb-filament breakages from vibration. The seat hinges up, giving access to the 12-volt battery. Fuses for the electrics are in a little container alongside, and battery gases are bled off through a plastic overflow pipe. 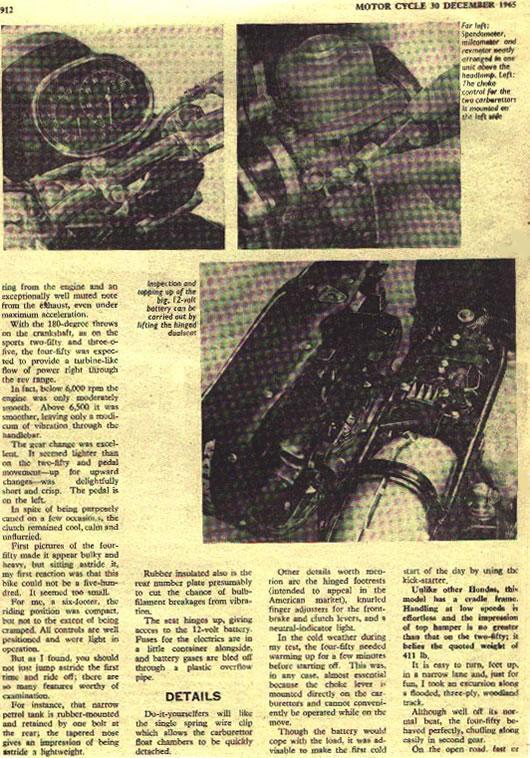 Do-it-yourselfers will ike the single spring wire clip which allows the carburettor float chambers to be quickly detached. Other details worth mention are the hinged footrests (intended to appeal in the American market), knurled finger adjusters for the front brake and clutch levers, and a neutral-indicator light.

In the cold weather during my test, the four-fifty needed warming up for a few minutes before starting off. This was, in any case, almost [?] because the choke lever is mounted directly on the carburettors and cannot conveniently be operated while on the move. Though the battery would cope with the load, is was advisable to make the first cold start of the day by ising the kick-starter.

Unlike other Hondas, this model has a cradle frame. Handling at low speeds is effortless and the impression of top [?] is non greater than that on the two-fifty; it [?] the quoted weight of 411 lb.

It is easy to turn, feet up, in a narrow lane and, just for fun, I took an excursion alonf a flooded, three-ply, woodland track. Although well off its normal beat, the four-fifty behaved perfectly, chuffing along easily in second gear.

On the open road, fast [?] low-speed bends called for negligible effort. Damping of the front-fork action was noticably good and effectively ironed out road shocks at all speeds. In contrast, the read suspension -though, set at is maximum load position- was too soft and lacked really effective rebound damping. This caused a certain amount of pitching on bumpy surfaces and tail-wag when [?] smartly. 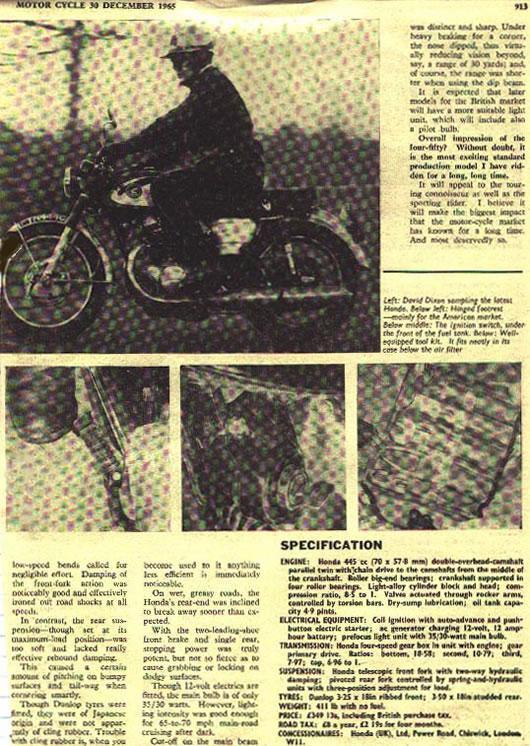 Though Dunlop tyres were fitted, they were of Japanese origin and were not [?] of cling rubber. Trouble with cling rubber is, when you become used to it anything less efficient is immediately noticeable. On wet, greasy roads, the Honda's rear-end was inclined to break away sooner than expected.

With the two-lwading-[?]-front brake and single rear, stopping power was truly potent, but not so fierce as [?] [?] grabbing or locking on dodgy surfaces.

Though 12-volt electrics are fitted, the main bulb is of only 35/30 watts. However, lighting [?] was good enough for 65-to-70 mph main road cruising after dark. Cut-off on the main beam was distinct and sharp. Under heavy [?] for a [?] the nose dipped, thus virtually reducing vision beyond, say, a range of 30 yards and of course, the range was shorter when using the dip beam. It is expected that later models for the British market will have a more suitable light unit, which will include also a pilot bulb.

Overall impression of the four-fifty? Without doubt, it is the most exciting standard production model I have ridden for a long, long time.

It will appeal to the nouring connaisseur as well as the sporting rider. I believe it will make the biggest impact that the motor-cycle market has known for a long time. And most deservingly so.